As the year winds to an end, it's time to review my 2010 New Year's resolutions.


I want to read more.
Between Kathy's fabulous recommendations, new book releases by my fave authors (and Connie Willis, you know I'm writing about you), I'm getting quite a few books read — many more, in fact, than when I "try" to read more.  Honestly, I should remember that it's the quality of the books, not quantity, that spurs me on — and frankly, the quality lately has rocked!
I want to write more letters.
I can't remember the last time I sent a letter.  Wait, yes I can: September.  Still, not stellar.  Shame on me.  (And no, birthday cards do not count, no matter how much I wish they did.  That would put me in the "wow, you write a lot of letters" range.  Alas.)
I want to listen to music more.
Now that David has a new computer, we will reorganized our music library.  We will put the new stuff on there and rock on more often when we're home.  I've been launching The Pussycat Dolls when I leave for my run — and when I start again, they'll rock me and the cats every morning.
I want to listen to more music.
I'm still listening to my pop music station, and I've found an even better local one that doesn't fade out when I travel north.  I've downloaded a few new songs that I have encountered on the radio and on the Web, and I've started to surf iTunes for fun stuff. "Waka Waka" and "I Just Haven't Met You Yet" are new, fun downloads.

However, it's amazing how much of pop remains mediocre.  Nothing personal against the songwriters, but honestly: when the songs all sound alike and carry the same pablum message (you are a hero with a capital "h" and don't you start disbelieving this, only with lots more slang and a little embarrassing bad grammar), I'd hope someone would listen and maybe go bravely into new territory.  Wait, we're talking about money — and if Hollywood is resting on the old tired-and-tried, I guess I can't expect any more from... where do pop songs come from again (aside someone's really taxed so-called "imagination")?
I want to run faster.
I've given up on this.  Between the weather and my sinuses, I've spent little time actually on the road.  Heck, I haven't even been to the gym this month, I don't think — although I might have gone the first few days, when I tried to convince myself my inability to muster a single moment of momentum didn't indicate poor health.  (Yes, most times I'm like the Energizer Bunny on speed, but I don't pay attention to clues I don't like.)
So, how are your resolutions coming along?
Posted by Chris at 10/26/2010 12:51:00 AM No comments:

I've lived with my Fill in the Gaps book list for about six months or so, and I am starting to think I put too many "should-read" books on the list and not enough "wanna-read" books.  Plus, I might already have read a couple of books I listed. 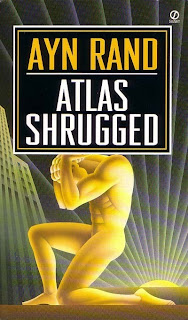 First: Ayn Rand.  I read one of her big books.   Atlas Shrugged, I think.  I think.  Granted, it was nearly 30 years ago, but I know I slogged thr — er, read one of her mammoth books.  I also read a short one: We the Living.  Maybe even Anthem, too.  I didn't keep a list when I was in high school and college, so I'm at a loss.  Plus, do I want to read it?  Really, really want to read it?  If I already did, the answer is "no."  If I didn't, the answer may be "no" anyway.  So, I shall ponder Ayn Rand.
While I'm at it, I'd better ponder Edith Wharton, too.  I know I read one of her books.  Was it The Age of Innocence?  She's not a one-hit wonder, and I don't want to miss her good stories, but there's too much to read to leave a re-read on the list.
Plus, I must strike The Seven Per-Cent Solution — I read it while dating David.  (Part of our courting was trading book suggestions.  He may never forgive me for recommending the book I was reading when we first met: The Lovely Bones.  Hey, at least I stopped him before he picked up House of Sand and Fog!)
Finally, I made the list Dickens-heavy.  He probably deserves it, but I do think I set a Dickens record on that list.  I will ponder that decision. 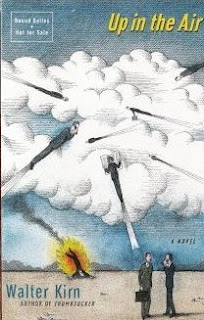 Here is the question: what shall I put in their places?  Well, I've been eyeing Up in the Air for a while, and I just happened to pick up a copy because I thought it was on my list.
What can you suggest I add in place of the ones being so unkindly kicked off my Gap list?  My friend Louise shared an article a Tweeter wrote to a response to her inquiry of "books that changed your world," and I was thrilled to see so many of my "gap" books on there.  (On the other hand, maybe I should have been embarrassed that I hadn't yet read them....)
Tell me what books changed your life, and why I should read them.  Offer your suggestions in the comment section below.  We'll talk.
Posted by Chris at 10/21/2010 12:46:00 AM 4 comments:

Email ThisBlogThis!Share to TwitterShare to FacebookShare to Pinterest
Labels: Fill in the Gaps

Wilde’s most notable works include The Importance of Being Earnest and The Picture of Dorian Gray. To this day, he is widely considered to be iconic in the gay community. He passed away at age 40 in 1900 from cerebral meningitis.

Shawqi was known primarily as a poet. He was particularly known in the Arabic literature community for being the first to write poetic plays. The play which gave him the most fame and recognition was the tragedy, The Death of Cleopatra.

Last month, Agatha Christie received the same honor from Google Doodle. Google remembered her 120th birthday by including the mustache of her famous detective, Hercule Poirot. (Via the Guardian)

This couldn't be more perfect for this blog! Paul Bibeau is a man who has pondered all things vampire — usually Vlad-related, but he has gone farther afield from time to time.  Those thoughts, vapor trails and experiences are what form Sundays with Vlad, a book with wit, charm and heart.
It starts with living in an ancient, creepy house with an older sister.  (And the sibling is the scary part!) It continues with his youth and, finally, involves his wife.  In fact, the book begins with an affidavit in which his wife takes full responsibility for the decision to honeymoon in Transylvania.  (When he regaled the audience with that fact at the 2008 Virginia Festival of the Book, we all had to buy the book just because it was true.)
Bibeau has a very good sense of humor about the entire situation: of course he's obsessed with Vlad, of course history is going to fight him on this, of course a developing nation will want to approach its own folks tales in its own way.  Dressing up like garlic and getting lost in Romania is just part of the trip. He also presents his information, both personal and "professional," with good, solid and interesting writing.
I also do not mean to malign his "professional" information.  If anything, this was the best part of his book. I am all about memoir, but pulling in diverse bits of information regarding psychology, economic development and history gave it a great foundation.
However, what makes this book fun also takes it dangerously close to excess: all things vampire can get a little, er, excessive.  Don't get me wrong: I enjoyed it.  I just read it all at once, and it got a little overwhelming.  I suggest to fellow readers to restrain their enthusiasm and limit themselves a chapter or two at a time.
So read this book and don't be surprised if you find yourself looking longingly at your tattered copy of Dracula on the bookshelf.  (Of course you have one.  Go look.  See?)  It's the cost of doing business with a good book.
Posted by Chris at 10/10/2010 10:10:00 AM No comments:

The Man in the Yard

My father told me once
that when he was about twenty
he had a new girlfriend, and once
they stopped by the house on the way
to somewhere, just a quick stop
to pick something up,
and my grandfather, who wasn't well—
it turned out he had TB and would die
at fifty-two—was sitting in a chair
in the small back yard, my father
knew he was out there, and it crossed
his mind that he should take his girlfriend
out back to meet him, but he
didn't, whether for embarrassment
at the sick, fading man
or just because he was in a hurry
to be off on his date, he didn't
say, but he told the little,
uneventful story anyway, and said
that he had always regretted
not doing that simple, courteous
thing, the sick man sitting in
the sun in the back yard would
have enjoyed meeting her, but
instead he sat out there alone
as they came and left, young
lovers going on a date. He
always regretted it, he said.